I just came back from the Pipeline Summit, a digital sales conference taking place each year in Poland. This year was the 5th edition.

I had a chance to exchange ideas with inspiring people, learn a bunch about the evolution of sales, and get pumped about trying something new.

I was also humbled and surprised by all the positive feedback I received on my “Visual storytelling that sells” talk. It made me think: “if the attendees found it helpful, maybe it would make sense to share it with a larger audience of sales professionals?”.

So here we are.

This blog post is the text version of the presentation I delivered at the Pipeline Summit in October 2019. It’s written for anyone responsible for converting leads into customers who is interested to learn more about the power of storytelling in sales.

Secretly, I would love for it to help you create the next great sales deck. One that will not only make your prospects feel blown away but also Andy Raskin (more on that later).

From snooze-worthy to binge-worthy with visual storytelling

We live in a time of information overload. Today, each of us individually generates more information than ever before.  But although the world around us has so rapidly evolved, our brains didn’t get a chance to catch up. The result? Staying focused can quickly become overwhelming.

In a recent survey conducted by Prezi, four out of five professionals admitted that, in the most recent presentation they attended, their attention shifted away from the speaker.

This statistic may come as a shock. But you know what I find the most mind-boggling?

If we are having trouble keeping attention then how come, on average, each of us can spend 71 minutes a day watching Netflix? This is about half as much time as people spend with their families.

Keeping attention while binge-watching Strange Things, Black Mirror or Orange is the New Black suddenly doesn’t seem to be a problem.

What’s the “magic” trick? How do you get your audience to give you their complete attention, instead of playing Candy Crush Saga in the background?

The good news is that you can effectively use visual storytelling in sales too. Read on to learn how to apply it to your sales presentation.

Using video to tell the story of “real beauty”

Visual storytelling uses visual communication to craft a narrative that explains a concept and evokes an emotional response. This can be done using different formats. Two formats that naturally come to mind are infographics and videos.

A great example of a video that has successfully incorporated visual storytelling is the “Real Beauty Sketches” ad from Dove.

The ad shows women describing themselves to FBI trained forensic artist Gil Zamora (from behind a curtain), who draws a portrait of them based on their description. Afterwards, a random stranger is asked to describe the same woman to Gil to see how their descriptions would differ.

What we get are two completely different portraits. The one based on the stranger’s portrayal is more beautiful, happier and more accurate.

When Dove reached out to Ogilvy Brazil, the creative agency behind the video, they gave them a straightforward brief: Make women feel better about themselves.

They knew the statistics. Only 4% of women around the globe feel good about themselves. The idea was to prove them wrong about their self-image. With the concept of “Real Beauty Sketches,” they assumed that women would probably describe themselves in a more negative way than perceived by a stranger.

Dove didn’t approve a script. They approved a social experiment.

The result exceeded expectations. The video went viral because it showed true stories; it moved the audience and made people think.

Until today, with over 163 million views globally, it’s the most-watched online ad ever created. It had over three million shares, making it the third most shared video of all time.

These are some impressive numbers.

Now, I hope you are asking yourself “What makes visual storytelling so powerful?”.

The answer is: our brains.

Our brains are incredible at remembering pictures. When we hear information, we are likely to remember only 10% of that information in three days. However, if a relevant image is paired with that same information, we retain 65% of it three days later.

Our brain sees words as lots of tiny pictures, and we have to identify specific features in the letters to be able to read them. That takes time.

Our brain can process visuals 60,000 times faster than text. We only need 13 milliseconds to process the entire image our eyes see.

On top of that, according to the researchers at Michigan State University, our visual cortex controls more than interpreting images. It has decision-making power. Combine that with the release of a trust hormone, called oxytocin, which gets triggered when we hear stories. You gain trust plus decisions.

What more can a salesperson ask for?

In summary, visual storytelling helps you:

My favourite story of visual storytelling is about popcorn. Mainly because, contrary to women feeling bad about themselves, there is nothing emotional about popcorn.

In 1994 the Center for Science in the Public Interest’s (CSPI) was assigned with a task to educate the public about the unhealthiness of movie-theater popcorn. Back then, the majority of the movie theaters were using coconut oil to pop the corn. This method was turning popcorn into a saturated fat bomb.

CSPI knew that the typical bag of movie popcorn had 37 grams of saturated fat, while the USDA recommends you have no more than 20 grams a day.

The challenge was that most of the people didn’t know what “37 grams of saturated fat” meant.

Is it “very bad” (like cigarettes) or “normal bad” (like a bag of cookies)? They needed to shape the message in a way that would make it easier to process the concept of saturated fat, and that would resonate with an average American.

Silvermann, who was working at CSPI back then, came up with the following idea: “A medium-sized ‘butter’ popcorn at a typical neighborhood movie theater contains more artery-clogging fat than a bacon-and-eggs breakfast, a Big Mac and fries for lunch, and a steak dinner with all the trimmings – combined!”.

The idea was accompanied with visual images and broadcasted at the movie theaters during the commercial slot.

The sales of movie-theater popcorn went down by 50% post the CSPI campaign. Movie theaters were forced to replace hydrogenated coconut oil with healthier alternatives.

The importance of storytelling in sales

In the popcorn example, visual storytelling led to decreased sales. Now let’s look at how it can help you drive more revenue when applied to your sales presentation.

According to a study performed by Accenture, 60% of people find generic sales pitches irritating. In my life, I have sat through many sales demos, and I feel the same.

If you want your sales pitch to stand out, you need to go beyond statistics and boring product overviews. A recent study showed that 5% of meeting attendees remember statistics, while 63% recall stories.

Creating a winning sales pitch with the visual storytelling framework

I will show you now a framework that will help you develop a winning sales pitch with visual storytelling.

It’s not as complicated as you might think. Here is all you need:

Let’s start with the core message.

In the “To Sell is Human” book, Daniel Pink outlines a concept of “The Pixar Sales Pitch”. Every Pixar film follows the same template:

This template has allowed Pixar Animation Studios to become one of the most successful studios in movie-making history.

Combine the Pixar Sales Pitch with meaningful visualizations that will bring your story to life. You get two steps closer to creating an epic sales deck.

For inspiration on how to effectively visualize your data and statistics I would recommend checking out the Occam’s Razor blog by Avinash Kaushik.

The last step is to put it all together in an organized structure following particular order:

The story of “the greatest sales deck”

This leads us to the story of “the greatest sales deck”. In 2016, Andy Raskin —a communication expert responsible for crafting some of the most successful sales, marketing and investor pitches in Silicon Valley— published a Medium article praising Zuora for creating the greatest sales deck he has ever seen.

According to the salesperson from Zuora, this sales pitch deck has continuously helped him close the biggest deals of his career.

In his post, Andy highlights the five elements that make the Zuora deck so effective. These elements map perfectly to the structure outlined above.

Zuora sales deck starts by introducing the current world and what’s broken. It then highlights that in this world, there will be both winners and losers. The next step is the “teaser” vision of the happily-ever-after that their product/service will help the prospect achieve. Andy names it the “Promised Land”. After that comes the introduction of the “magic features” that will help to overcome the obstacles to the Promised Land. It finishes with evidence in the form of customer testimonials.

LeadCrunch has applied the same structure. No wonder that Hubspot has mentioned it as one of the 25 best sales decks. It follows a winning framework.

Seeing the examples from Zuora and LeadCrunch, you might feel that creating equally great sales pitch will take ages.

Luckily there are tools like Piktochart which provide visual inspiration in the form of ready-to-use sales templates.

All you need is to select one and edit it to make it your own. Here are two examples:

Ready to create the next great sales deck?

This blog post will just be a bunch of text unless you use it to create a better version of your sales presentation. That’s why I would like to end with a mini-mission for you.

You have one week to complete it.

Step 2: Use one of the Piktochart templates.

Step 3: Test it during your next sales demo.

Post it on LinkedIn and mention Piktochart. We will highlight the best ones on the Piktochart blog.

If you need inspiration, check out the sales deck from Develocraft. Anton, who is a Customer Developer at Develocraft, crafted it in just a few days after attending my talk at the Pipeline Summit. His presentation (created in Piktochart) shows the story of why it’s worth to use their development services in the digital experience world:

Agata is the former VP of Growth at Piktochart. When she is not on Slack, you probably can find her mentoring other leaders on GrowthMentor, chasing the sun with her family, or experimenting in her kitchen. You can follow Agata on LinkedIn or check out her growth marketing consulting services. 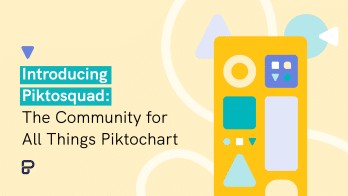 Introducing Piktosquad – The Community for All Things Piktochart 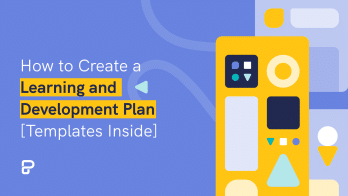