We first launched our user event series, called PiktoTours, back in August 2015. At that time, we viewed getting together with users around the world as something that could be really cool, but it wasn’t clear what the actual business benefits could be.

Those who work each day on building communities might relate – how do you demonstrate that what might appear to only be a casual event might actually move the needle on a startup’s business goals?

When members of the Change.org team in Mexico City said they would be at our PiktoTour event in January 2017, our team jumped for joy.

Change.org is the world’s platform for change. On Change.org, people everywhere are starting campaigns, mobilizing supporters, and working with decision makers to drive solutions. In fact, more than 100 million people in 196 countries are creating change in their communities!

We have followed Change.org’s amazing work since their launch in 2007. As for Mexico City in particular, Change.org made waves worldwide by taking the innovation of crowdsourcing and pairing it with a digital democracy experiment.

In 2016, the City asked its nearly nine million residents to help draft a new constitution through social media.

“Chilangos, as locals are known, can petition for issues to be included in the constitution through Change.org, and make their case in person if they gather more than 10,000 signatures,” wrote Ana Campoy in Quartz.

“They can also annotate proposals by the constitution’s drafters via PubPub, an editing platform similar to Google Docs. The idea, in the words of the mayor, Miguel Angel Mancera, is to ‘bestow the constitution project with democratic, progressive, inclusive, civic and plural character.’”

After our PiktoTour event in Mexico City, we stayed behind to talk about how the local Change.org team could use Piktochart.

“The way we consume content online has become extremely visual,” said Leticia Floresmeyer, Campaign Manager at Change.org Mexico. “People understand complex information much better when the presentation includes graphic explanations. Giving people a way to turn their petitions into a visual story can help them spread the message.”

An idea was born.

What if we created a Piktochart infographic template for all Change.org petitioners to tell their story visually?

Change.org had already been a Piktochart user for years, but the idea that we could collaborate on a template was something that organically grew from the PiktoTour.

Leticia’s role as a campaign manager involves working one-on-one with petition starters to develop their ideas into something that can create impact and social change. Each day, her goal is to support people who want to change their environment and think of creative ways to do this.

We knew Leticia would be the perfect person to tell us if an infographic template would be helpful to petition starters.

One of Piktochart’s talented designers, Maxi Albella, came on board as the design lead for the collaboration with Change.org. Having also led design work on a recent collaboration with Indiegogo, Maxi had a lot of ideas for how this new template could help petition starters without design backgrounds share their message of change through visuals.

“I’m an active user of Change.org. I’m always looking for campaigns that I can support, not only with my signature but also sharing the campaigns on social media. This organization helps many communities and it’s easy to get involved.”

When our two teams began brainstorming this template, we started with identifying how things are done now and the pain points both petition starters and Change.org staff experience:

A secondary pain point is around signatures deliveries. Petition starters will often hand-deliver signatures to decision makers in their community to show the collective desire for change in person.

Since a lot of the petition starters don’t have the software to design a layout on their own, signature delivery visuals have to be designed by Change.org staff.  This takes up the precious time of understaffed local teams.

“People struggle with design in general,” said Leticia. “Design software can be really hard to use, and creating attractive and beautiful visuals can be time consuming and difficult. A template would provide petition starters with a canvas that is already set up to convert a story into an attractive graphic. A winning template would be easy to use, easy to share, and visually attractive and inviting.“

Anatomy of the Change.org Template

Each Change.org campaign is wildly different. But we realized that they all share common traits:

Even though each cause and message is different, they all share a similar thread that we could capture in an infographic template. 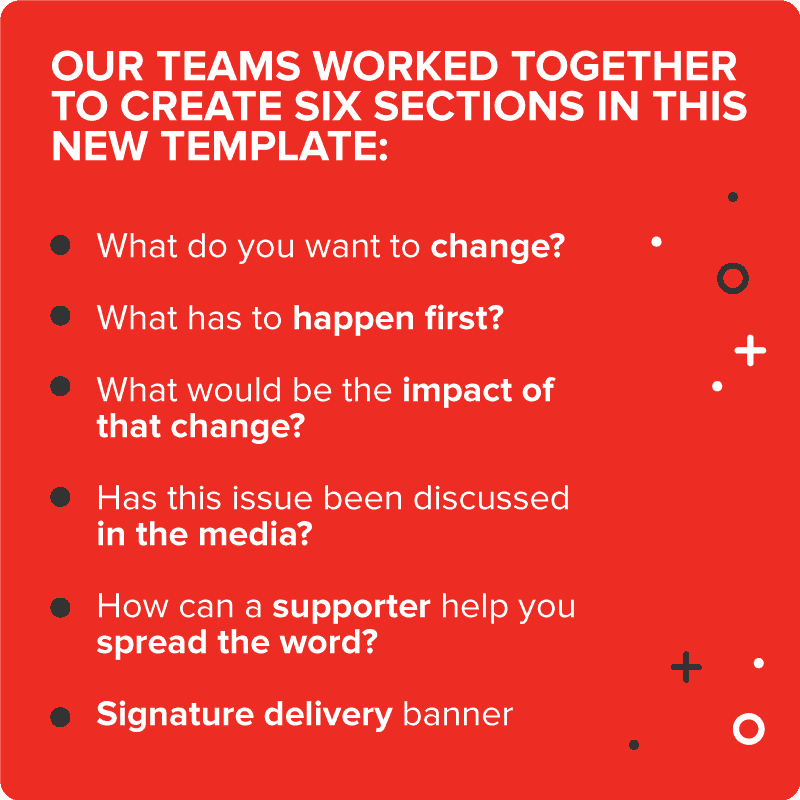 “While designing this template, I thought about both Piktochart users as well as Change.org users,” said Maxi. “I considered the best way users could express their ideas and petitions in a easy-to-use template.”

“We created a template following Change.org’s style guide, making sure it was consistent with their brand. This way, the user only needs to focus on adding as many blocks as they need and modifying the text boxes to share their campaign’s message,” he added.

Our team here at Piktochart also tried a brand new idea for a template – including both English and Spanish text.

A year ago, we introduced our Piktochart Spanish blog to house content for our growing Spanish speaking community. At the time, 4.2 million people around the world had created visuals with us and an impressive 720,000 people – or 17% of our total user base – resided in Spanish-speaking countries.

Our language of choice at Piktochart is in English, but we were excited to explore the idea of bringing Spanish into our collaboration with Change.org.

“We haven’t made a template in two languages and we don’t currently have an option for users to translate templates into other languages,” said Maxi. “So creating a template using two languages was a real challenge faced with this collaboration.”

This was compounded by another challenge our design team faces with each and every Piktochart template – we always want to avoid the text-heavy templates because we find they are not useful for users when they try to make a template their own. Plus, infographics shine best when they take complex text information and simplify it with images! 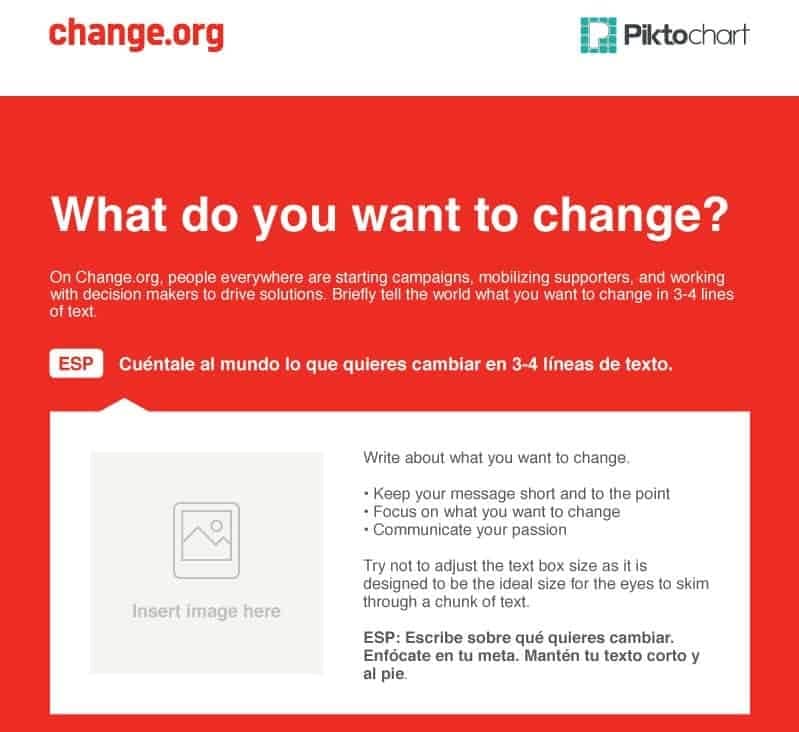 “In the end, we decided to keep the main explanation in English,” said Maxi. “Then, we added a short explanation of each block of text in Spanish. That way, Leticia and her team at Change.org Mexico could share this template with their petition starters and there would be no language barriers.”

We live in an incredible time. An person’s opportunity to make a difference is greater than ever before.

As the team at Change.org says:

“Gathering people behind a cause used to be difficult, requiring lots of time, money, and complex infrastructure. But technology has made us more connected than ever.” – Change.org

We invite you to explore our new template created with love alongside the incredible Change.org team (click here to access!). We are proud to be a part of bringing visual storytelling to important community and worldwide issues that are ripe for change! 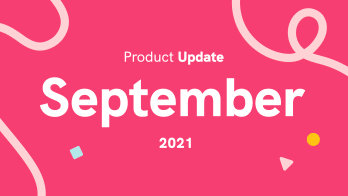 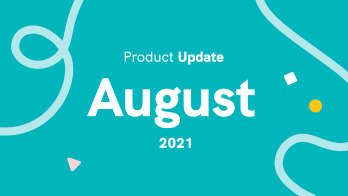 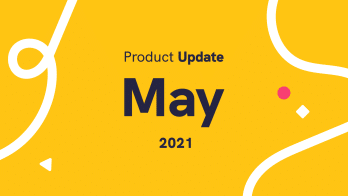